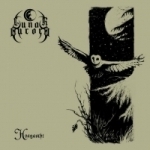 For a band formed in 1994, this is actually the first time I ever hear an entire album of them. Although I did know the name from probably a few years after their formation, the name itself was something to keep me away from listening to the music. And flooded by thousands of releases nowadays, it is easy to forget that certain band you had curiosity of checking out. So, after many years and no less than 9 albums, I had the opportunity to listen to the band. This is well played, well produced Black Metal which recalls more in style bands like SAMAEL and CELTIC FROST to a certain degree than BATHORY to make some clear examples. Mostly mid paced to an almost doomy feeling with a clear sense of melody, yet with that grim edge that makes the mark of their Black Metal sign. The vocals are also adequate to the style, and it must be mentioned that as the band usually does, lyrics are done in the Upper Bavarian dialect. Still, no matter if this has a lot of quality in many aspects; their music makes no lasting impression on me. Although the guitar riffs are quite straightforward and simple, they lack that certain something that makes the difference between great bands and pretenders. To me, all the songs keep it safe and the band is not daring to create something out of their already crafted path of occult symbols. In that aspect, I find many other bands to be more creative and interesting, yet maintaining that primordial touch. And it has nothing to do if they play mostly mid-tempo and do not add fast parts here and there; it is just that they all tend to sound similar although you can clearly hear they are not. So, if you are a fan of the band, this will not change that image a bit . For others, I would suggest checking out some earlier efforts, as I did that after listening to this album, and found their earlier release to be a bit more interesting and dynamic, to call it in a way. www.lunaraurora.de, www.cold-dimensions.de