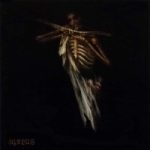 If you’re checking out our news section on a regular base you will already be aware of the fact that Germany’s Black Metal horde LUNAR AURORA decided to start up a label on their own after having experienced many label changes the hard way in the past already (almost each of their previous releases was put out by a different “company”)… “Zyklus”, the band’s sixth full length (recorded already way back in 2002), is their first on their newly founded Cold Dimensions label and from the business side of things really a very difficult task to start with. Due to the fact that there’s only four tracks on it, many mailorders / distributors will probably consider it as a mini CD, which it certainly is NOT! In typical LUNAR AURORA fashion, all of the featured tracks are very long in their individual playing time which demands some in-depth listening until you totally get into them. Furthermore there’s a rather sophisticated looking packaging (very Black Metal untypical, even without a bandlogo on the front) and almost poetic sounding song titles (‘Der Morgen’, ‘Der Tag’, ‘Der Abend’ and ‘Die Nacht’)… All of this certainly won’t really help making this an easy marketable product. But does that mean that “Zyklus” is a bad release then? Not at all! It’s actually another really strong one! To me LUNAR AURORA have always been very special (otherwise we obviously wouldn’t have released their first two albums on Voices Productions back then) as they simply don’t give a shit about any trends or rules of the underground. They just follow their own paths and focus on what they always did best, which is writing songs with a very deep emotional impact. When it comes to this certain sinister atmosphere in Black Metal, most people tend to think that all you need is an upfront keyboard, which delivers some bombastic soundscapes and then everything else is not really of importance any longer. WRONG! There’s hardly any bands left that are capable of creating a grim and very demonic atmosphere, but LUNAR AURORA is definitely one of them! In this respect “Zyklus” is Black Metal in perfection, despite all the unusual lyrical / visual ingredients. Even though the band occasionally uses keyboards, you hardly notice them as they mainly go for the very harsh, fast and raw style. And that’s what they are best at! The sound, the exceptional vocals, the atmosphere – everything’s just perfect here. So, if you lost your interest in this genre when bands started to copy DIMMU BORGIR and CRADLE OF FILTH while others decided to turn towards a more Rock’n’Roll – ish direction, this is without a doubt an item to regain your enthusiasm! Excellent! www.lunaraurora.de, www.cold-dimensions.de