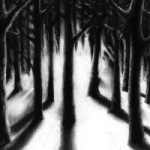 LUNAR AURORA might be a pretty unknown name abroad but these Black Metal purists have been around for more than a decade now and in my opinion they still don’t get the recognition they rightfully deserve. For those of you who did not catch up with them since the beginning this is not their newest album or whatsoever. Given the demand of the old releases of the band Cold Dimensions decided to unbury an old gem of the genre, their sought-after second album “Seelenfeuer” (Soulfire in english) including an improved artwork, remastered audio plus a bonus track (taken from their split “7 EP with fellow Germans SECRETS OF THE MOON). Musically, on this release LUNAR AURORA was (still is in fact) a band deeply rooted in the raw but decently executed Black Metal exercised by the likes of old EMPEROR, old MAYHEM and maybe an obvious resemblance to old IMMORTAL as well. Mostly you’ll hear the band galloping at a fast pace but with occassional mid tempo stints in order to add variety to their hymns which I would say becomes more addictive after subsequent spins of the CD. But what exactly separates them from the rest? I could point that a distinctive charasteristic (since day one!) of LUNAR AURORA is that what you see is what you get! I mean, just take a look at their cover artworks! All those grim, bleak and cold designs really portray the inside product 100%. I guess it is hard to believe nowadays that Black Metal has lost every gram of credibility but get this album for satan’s sake and engulf yourself in total darkness!!! Keep an eye open for their very first opus “Weltengänger” to be re-released by Cold Dimensions sometime this year. Visit the band’s website at: www.lunaraurora.de or the label at: www.cold-dimensions.de.