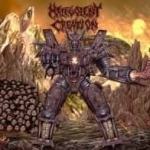 As some of you may know already, guitarist Jim Nickles was in the early day line-up of the Floridian Deathsters MALEVOLENT CREATION. He, Brett (Hoffman) and Phil Fasciana used to arrange band practices at Nick’s house every day for the first 10 months or so after teaming up with each other, and having an intention to make the heaviest and sickest musick on the face of the earth. This group was named as MALEVOLENT CREATION in 1986 (Brett was a huge fan of the Transformers cartoon, which inspired him naming the band as MALEVOLENT CREATION after the aforementioned cartoon). During those 10 months, the band wrote 7 or 8 songs (without bass and drums though) that were the results of the guys’ hard band practices. On September 20th, 1987, when the MALEVOLENT CREATION line-up was completed by Jason (Blachowicz) for bass and Dennis (Kubas) for drums, the band entered at Select Sound Studios in Kenmore, NY, to record 3 songs that were never released officially until now in 2011 – both as a limited run CD-format by Jim Nickles himself as well as through Italy’s F.O.A.D. Records as limited run vinyl formats (note: there’s still some limited quantities available for a regular edition of the demo on F.O.A.D. Records). As for the music on this disc, it contains 2 remixed versions plus one remastered version from the old demo songs, in addition to the original demo versions – 6 songs all in all. First off, I have to admit Jim has done great job at his own Shredly Studios by blessing these 3 three MALEVOLENT CREATION tunes (‘Sacrificial Annihilation’, ‘The Traitor Must Pay’ and ‘Confirmed Kill’) by the sound quality they deserve. It’s pretty incredible what a modern studio technology can actually do to some old, dusty tapes. A listening enjoyment of this MALEVOLENT CREATION’s first demo has increased somewhat drastically now when Jim has taken his time to make the demo more audible – and just more listenable. The original songs have got way more heaviness and clearness to them now, simply giving enough boot to kick the songs on that level sound-wise, in which the MALEVOLENT camp’s all-out brutality and shredding quality come truly visible in its full potential. All the three songs sound just murderous and absolutely killer on account of Jim’s determined and hard work to make these songs sound right. Compared to the original songs, the difference is really huge – so huge that to be honest with all of you, I don’t even bother to listen to the old demo versions on this disc any more. This MALEVOLENT CREATION’s first, unreleased demo simply screamed to be remixed, remastered and re-released – and now when it’s finally been done, every die-hard MALEVOLENT CREATION fan should be happy. I for one know for sure, I am. More info at: www.myspace.com/malevolentcreation, www.myspace.com/shredlystudios, www.foadrecords.it