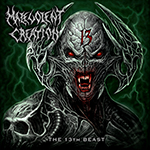 Since 1991, Floridian Death Metal masters MALEVOLENT CREATION have released thirteen albums of death, brutality and slaughter. So it’s only fitting that their latest is entitled "The 13th Beast". Consisting of Lee Wollenschlaeger (guitar, vocals), Phil Fasciana (guitar), Josh Gibbs (bass) and Philip Cancilla (drums), it’s almost a completely different band than their first release "The Ten Commandments". The late, great Brett Hoffmann is replaced by Lee who fits in quite nicely with the sound of the band. Brett is sorely missed. But the band plows on with an energy that doesn’t falter from previous albums. The first spoken words from opener ‘End The Torture’ are "I cut off his legs and his arms and his head. And I’m going to do the same to you", which sum up what type of brutality "The 13th Beast" is all about. If that’s not enough to get your attention, Lee’s blood-curdling growls explode out of the gate before dual guitars escalate the madness as supersonic speeds. For a band that formed in 1987, they have an energy and vigor unsurpassed in the genre. They have nothing to prove, but they do it anyway. ‘Mandatory Butchery’ sounds like a spiked steamroller crushing everything in its path. ‘Agony For The Chosen’ is a bloodthirsty gang of putrid corpses riding for hellbent rebellion. And goddamn if ‘Canvas Of Flesh’ doesn’t barrel down our doors with furious riffs, exhausting drums and hate-filled rasps of vocal torment. ‘The Beast Awakened’, ‘Decimated’ and ‘Bleed Us Free’ are all scorchers. And just when you think it can’t get any faster, ‘Knife At Hand’ proves you wrong. ‘Trapped Inside’ and ‘Release The Soul’ end the album at the same colossal rate as every other song on this incredibly kick-ass album. If you’re a Hoffmann fan (as I’m sure you all are), have no fear and give Mr. Wollenschlaeger the chance he deserves. He steps right up and delivers a vocal performance that’ll instantly make you a follower. And if "The 13th Beast" is any indication of what future albums have in store, the might MALEVOLENT CREATION will continue to bludgeon the masses with their Death Metal mayhem. For more info, check out www.facebook.com/malevolentcreation, www.centurymedia.com