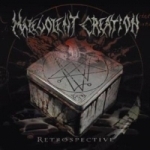 I really have no idea why “Retrospective” had to be released… In total this album features 17 tracks from five of MALEVOLENT CREATION’s regular studio albums (three from “Eternal”, “In Cold Blood” and “The Fine Art Of Murder” and four from “Envenomed” and “The Will To Kill”), but as there’s no previously unreleased or exclusive material on offer here and the albums are all still pretty easy to find, it doesn’t really make sense to me. I mean, MALEVOLENT CREATION by no means is a band that constantly releases “hit-singles”, that are climbing up the charts and that people are buying a sort of “best of” compilation from… C’mon, this is fuckin’ brutal Death Metal and fans of the band will certainly already have the regular releases in their collection, while everyone else probably doesn’t give a shit anyway. So, with that in mind even the often used argument of “a label trying to cash in on the band” won’t really work here, if you ask me… Musically it is of course still a nice overview about MALEVOLENT’s work between 1994 and 2001 and a cool opportunity to compare their constantly changed line-ups with each other. Too bad that Jason Blachowicz, who fronted them between 1995 and 1997, didn’t last in this position as “Eternal” and “In Cold Blood” will probably always remain their most brutal, most intense outputs ever. I would’ve loved to see the band continue on in that direction. To me (apart from their early stuff and despite Blachowicz’s partly rather controversial lyrics) my personal MALEVOLENT faves! But all this of course still doesn’t justify the purchase of this superfluous compilation as not even the packaging knows to convince and comes across pretty cheap looking (just a folded cover, no real booklet – nice coverart though…). So, if you’re not a die hard fan / collector with too much money, you better go for their regular releases! All further info at: www.crashmusicinc.com, www.malevolentcreation.cjb.net