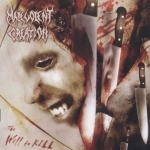 MALEVOLENT CREATION
The Will To Kill
(Nuclear Blast Records)
41:33min

Well, the time between the first announcements of the new album and its actual release was full of shocks – at least for me as a long-time MALEVOLENT CREATION worshipper and fan of the original vocalist Brett Hoffmann. Early rumors about “The Will To Kill” told of a production in Tägtgren’s Abyss Studio and a more Swedish sound, shock number one!!! The second shock was the label change to Nuclear Blast, which made me fear a “wimp-out” or commercialized sound of “The Will To Kill”. But fortunately both nightmares did not come true. Instead of that the most horrid thing I could imagine – a change of vocalists fucking did happen, but it did not turn out as disastrous as in the mid-90s, when the bassist took over the mic and degraded MALEVOLENT CREATION on “Eternal” and “In Cold Blood” to an average Death Metal band. Now Kyle Symons (HATE PLOW) replaced Brett Hoffmann and in my eyes this is quite a set-back, although Kyle does a much better job than Jason did, he still has not the unique raw voice that Brett had and so some of MALEVOLENT CREATION’s intensity is lost, especially I miss the long brutal screams, Kyle does them live, where he absolutely crushes Brett, but he does not do that on the album very much. But for people who do not care too much about this matter “The Will To Kill” is definitely a great album!!! There are some fantastic Death / Thrash songs on it, like the brutal title track, the heavy and catchy ‘Divide And Conquer’ or the straight killer track ‘Lifeblood’. On MALEVOLENT CREATION’s 2002 effort you won’t find a single weak track!!! Also great is the participation of James Murphy, who has some extraordinary solo-parts on ‘Assasin Squad’, it seems like he’s getting fit again after his struggle with cancer. Compliment also to Phil Fasciana and Rob Barrett for creating such a load of awesome DARK ANGEL / SLAYER-influenced riffs, killer work! So check out this CD, if you are into brutal Death / Thrash, because this is this year’s best album of that genre!!! I will also try my best to forget about Brett and bang to “The Will To Kill” until I’m fucking dead!!! Check out a MP3 file on MALEVOLENT CREATION’s website: www.malevolentcreation.cjb.net