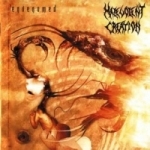 MALEVOLENT CREATION is one of the very few Death / Thrash bands from the U.S. which still put out excellent releases year after year. Their latest album was recorded in the same line-up which also made “The Fine Art Of Murder” such a great release. On “Envenomed” they still know how to deliver decent Thrash Metal because the album sounds really furious! From the beginning till the end, the songs are played at such a high speed, it almost makes you dizzy! Some mid-tempo passages wouldn’t have harmed the album and would eventually have given a bit more variety. But on the other hand I can’t really complain about this. Next to HYPNOSIA’s “Extreme Hatred”, it is without a doubt the best release in the furious Death / Thrash genre within the last couple of months. Buy!