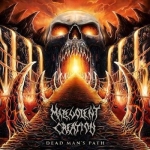 Damn, it’s been five years since the last MALEVOLENT CREATON album "Invidious Dominion" and if you judge the band by its latest work, that one hadn’t stayed long in my player. Somehow it didn’t have enough hooks and the mix was rather one dimentional without any dynamics except unrelenting speed. There have also been some changes in their ranks, drummer Gus Rios was replaced by Justin DiPinto (ex – MORTAL DECAY, ex – PYREXIA) and let me tell you, this surely added a few deadly cylinders to this gun firing machine. A track aptly named ‘Dead Man’s Path’ starts the proceedings, setting gloomy atmopshere with its slowly paced rhythm, choking doomy riffs and menacing half-spoken vocals by Bret Hoffman. It immediately brings memories of the opening track ‘Memorial Arrangements’ from "The Ten Comamndments" and then – CRASH – all fuckin’ hell breaks loose. The second track ‘Soul Razer’up the tempo to the maximum proceeding to obliterate the listener with trademark MALEVOLENT CREATION speed which goes from fast to super fast and then there are those riffs!! I’ll tell you this – let the young bands innovate, but from old schoolers I expect certain things which made me like them in the first place and these guys don’t fucking dissapoint here. The next 40 minutes are filled with pure Death Metal aggression manifesting itself through skin melting riffs, head blowing tempo changes and those vocals which make you wanna kill!! Mixed and mastered by Dan Swanö, "Dead Man’s Path" shows MALEVOLENT CREATION sounding at their best since "The Fine Art Of Murder" – the dynamics are there, each instrument is perfectly audible and the whole sum of the parts is just pummeling, non-stop attack to the senses that makes you to fall into epileptic headbanging mosh insanity! Some other standout tracks include the insanely catchy ‘Corporate Weaponry’, the SLAYER – tinged ‘Blood Of The Fallen’, the mid-paced heavy number ‘Extinction Personified’ and the closing strong statement in form of ‘Face Your Fear’. That doesn’t mean other tracks are inferior or less extreme – no way – they keep the pressure up to the boiling point throughout most of the album spicing it with dark gloomy riffs. I can say this is the album MALVOLENT CREATION fans have been waiting for a long time and it sets them on the top of the Florida Death Metal scene… at least for now! They’ve still got it and "Dead Man’s Path" sounds like SLAYER on amphetamines going crazy, it is that good and easily one of the best abums of the year! Buy or DIE!!!! www.facebook.com/malevolentcreation, www.centurymedia.com