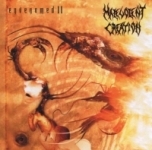 If you already own the first version of "Envenomed", like I do, you should be pretty offended by this kind of re-release, because it features three bonus tracks, that should be interesting for any fan of MALEVOLENT CREATION – a DARK ANGEL cover and two re-recorded demo-songs from the late 80s – all songs definitely kill!!! But any real fan of this band would have bought the "Envenomed" CD as soon as he gets it and this re-release was put out a year after the normal version. I am lucky to be able to sell my old CD to friend, but if you don’t get this chance this is a fucking rip off!!! I am a longtime worshipper of MALEVOLENT CREATION and it is extremely disappointing to me, that Phil Fasciana (runs Arctic Music) puts out such a CD, which not even has a new design or the lyrics of the bonus songs – this really sucks!!! Maybe he should think about a CD, where only re-recorded material or demo tracks can be found, but a re-release like "Envenomed II" is simply unfair and a slap in the face of any fan!!! It would be a great gesture of the band / label to put the songs as MP3 file on the band’s website, so every fan can enjoy them and not only those who buy the CD just now for the first time. Contact me and I will copy the songs to any true fan!!! Label’s website: www.arcticmusicgroup.com. Band’s website: www.malevolentcreation.cjb.net