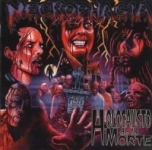 Even though 1987’s "Season Of The Dead" is considered one of the first Death Metal albums ever released, I wouldn’t necessarily label NECROPHAGIA a Death Metal band these days. Killjoy’s insane, twisted and rather hysterical vocal delivery has become a lot more intense nowadays and has certainly nothing to do with the usual deathgrunting of an "ordinary" Death Metal band. And musically there’s also a lot more to NECROPHAGIA than just lowtuned brutality. This is far more sick and the term "Gore Metal" would probably fit them a lot better (and not just because their lyrical topics focus on that exclusively…). Anyway, on this comeback album you’ll get a lot of doomy influences in the good old BLACK SABBATH tradition, disharmonic guitars à la VOI VOD (just listen to the ending of ‘The Cross Burns Black’) and the beginning of ‘Embalmed Yet I Breathe’ even sounds pretty close to CELTIC FROST’s ‘Circle Of The Tyrants’ main riff. This is really sick stuff, and probably once again ahead of its time. MAYHEM’s Maniac is featured on ‘The Cross Burns Black’ and the album outro ‘Hymns Of Divine Suicide’ and PANTERA’s Phil Anselmo (a.k.a. Anton Crowley) plays guitar (!!) on the whole record. Due to the fact that "Holocausto De La Morte" hasn’t been released in Europe previously, this is your chance to pick it up with approx. sixteen bonus minutes as The Plague / Hammerheart Records added ’99’s "Black Blood Vomitorium" MCD as a bonus on here for even more insanity. Definitely one of the most unique records in extreme music these days.