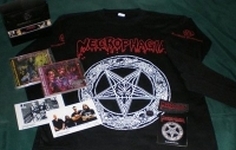 NECROPHAGIA was one of the first Death Metal bands, which started with their first demo back in 1984. I didn’t know the music of the band but the name is wellknown, especially because of their image and affectation for gore and horror movies. So now, this is the re-release of the primary published "Holocausto De La Morte" record from 1998 (limited to 800 copies). Additional to the album they put the "Black Blood Vomitorium" EP from 2000 and the "Lives In The Woods" demo from 1998 on the disk. The booklet contains a foreword and interview with the singer Frank "Killjoy" Pucci, where he tells that Phil Anselmo is responsible for the resurrection of the band and that he wrote most of the music for this album. He also played the guitars on the record, but under the pseudonym Anton Crowley. This also explains why the music gets more sludgecore influences. The songs are mostly in midtempo or doom regions. The lyrics are influenced by and also a tribute to the Italian regisseur Luci Fulci and performed with sick chants. The sound samples between and sometimes during the songs descend from Fulci zombie movies. So if you like sick music and don’t own the original this is the right record for you. For more info, check out http://adp.areadeath.net/page.php?id=38