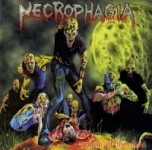 Great work from AreaDeath again! Next to the very cool and complete compilations for DECEASED, INSANITY, SKITZO, SAVAGE DEATH and a pretty cool range of other obscure and very old school bands, they also re-released the very cool NECROPHAGIA debut album “Seasons Of The Dead” with all their official demos and the unreleased EP from 1986. “Seasons Of The Dead” dates from 1987 and you can feel the ancient spirit from that era (a lot of classics saw the light of day). It’s like a slower version of SARCOFAGO’s “INRI”, the band unleashes some cool and dirty thrashy Death Metal with a lyrical love for gore and horror. Some juicy samples spice up the rotten atmosphere besides the production and decent musicianship. What stands out on this record are the vocals of Killjoy. No grunts are needed and it executes a natural brutality. Excellent! Also the riffing and leads are highly enjoyable. Just listen to ‘Mental Decay’ and you’ll discover cool Thrash riffs with a morbid edge. Drumming is ok. Nothing really spectacular and quite simple but also strictly serving the atmosphere. A track like ‘Abomination’ probably inspired the young CANNIBAL CORPSE because of brutality. People who missed the “Death Is Fun” compilation from 1995 by Red Stream / Morbid Granny (which is hard to find and probably out of print by now) and still have no copy of the NECROPHAGIA album, have their luck here. In detail this two disc edition of “Seasons Of The Dead” covers their unreleased 7″ EP from 1986, “Death Is Fun” demo from November 1984, “Autopsy Of The Living Dead” demo from 1985, “Rise From The Crypt” rehearsal from May 1985, “Power Through Darkness” demo from February 1986 and “Nightmare Continues” demo from October 1986. Especially these oldies sound even more brutal and rotten than the actual album! I wouldn’t call it a classic like “Scream Bloody Gore” or “Severed Survival”, but still this is an album of significant quality and justifies this reissue. The bonus disc completes the picture and leaves no other option than to obtain this piece of horror, inspired by the movie Evil Dead. Don’t know any price, but check www.myspace.com/necrophagiaofficial for soundbytes or adp.areadeath.net.