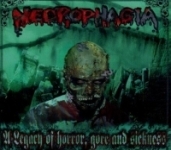 It seems that the reincarnation of NECROPHAGIA has set some old Death Metal fanatics hearts aflame. What with the release of their most recent album "Holocausto…" and the constant resurrecting of demos, live tracks and what else have you. NECROPHAGIA seem intent on letting us all know that they have been there, done that, worn the shirt and are going keep doing it. ‘A Legacy…’ catalogues their infamous demos from 86 and before, including for those truly perverted souls some horrid live tracks to boot. And what can you say of 80s NECROPHAGIA? Well, it’s 100% in the same style as their more recent recordings yet it is more horrid, rotten and down right necro! It reminds of me of a hybrid HELLHAMMER being attacked by those delightful Fulci zombies we hear so much about. The music is simple, raw and coarse. I mean really simple here people! The riffs are so damn simplistic one may wonder how they even got away with it! This particular CD encompasses NECROPHAGIA in their formative years and really is only for die hard fans of the band. I doubt those of you who were first introduced to NECROPHAGIA via their ‘Holocausto…’ CD and their ‘Black Blood Vomitorium’ MCD would go in for this it’s that raw. But if you are truly necro goat pervert, this my friends is for you!