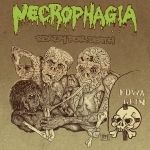 Long story short, “Ready For Death” was supposed to be released in 1986 before “Seasons Of The Dead”, but only saw the light in 1990 (as an unofficial version – Frank). I’ve read some speculations that it could’ve been the cornerstone of Death Metal had it been released in 1986, but after hearing it I highly doubt it. It’s ugly, raw, primitive proto Death Metal with some really killer parts but overall it sounds more like a demo than a real album. Herein lies its stinking charm, so I suppose Xtreem Music did a cool thing for the true fans of the band re-releasing this archaic piece of music in 2021. I really dig the ugly and fat sound, especially the bone shattering bass tones and Killjoy’s vocals are among the sickest in the world, so there are definitely meaty chunks of rotting riffs in tracks like ‘World Funeral’, ‘Black Apparition’, ‘Blood Thirst’ and my favourite slab – ‘Return To Life’. Yet some are like completely WTF in terms of wacky even naive arrangements that sound just like random stuff sewn together. In any case, for real fans and collectors of early Death Metal this is a must buy! Band info: www.facebook.com/necrophagiaofficial. Label: www.xtreemmusic.com