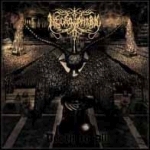 Then I saw the lamb open the sixth seal. There was a powerful earthquake. The sun turned as black as sackcloth made of hair, and the full moon turned as red as blood – the sixth NECROPHOBIC album can only be introduced with this apocalyptic words from the book of lies. NECROPHOBIC are for at least 10 years (“The Third Antichrist” via Black Mark) one of the few bands which are in the position to deliver one fantastic release after another. Even the downfall of their second label Hammerheart Records couldn’t stop their fury and since they safely arrived in the Regain family they are releasing their Satanic Death Metal manifests on a regular basis. Their last album “Hrimthursum” was in some way an experiment with an extreme amount of “bombast” for the typical NECROPHOBIC sound and “Death To All” has become the promised back to the roots album. So the sky has turned black again and you can feel the arriving thunderstorm from the first minute – the frostbitten guitars and remarkable vocals by singer Tobias Sidegard and I can’t deny some sweet memories to the opener ‘Rise Of The Infernal’ and ‘The Third Of Arrivals’ from their “The Third Antichrist” album. Think that especially this album is something like a blueprint to “Death To All” – less bombast but still an abyssal atmosphere. And with ‘For Those Who Stayed Satanic’ the Swedish band has composed in some way the Death Metal version of ‘The Metal Will Never Die’ (by the Weimar pony fans) – a perfect hymn for all true followers. Only minor point of criticism is the cover artwork which on one hand is quite to dark (the contrast is missing) and on the other hand is the idea not really fresh because the Italian Black Metal lunatics from ABORYM had used a very similar layout for their “Generator” release. Due to the resurrection of the brothers in law UNANIMATED everybody will try to compare both releases but I think the Death Metal world is big enough for two great bands with two essential releases. So death to all unbelievers! www.regainrecords.com, www.necrophobic.net, www.myspace.com/necrophobic