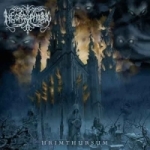 NECROPHOBIC has been an entity lurking in the underground for about 16 years now and in my opinion they have never gotten the much deserved recognition they rightfully earned. Their albums are somewhat hard to come across for the average Metal fan and adding to that a poor advertisement of their stuff by incompetent labels have contributed to gain the underrated mark. The have the fire, defiant compositions and skills to stand alongside the heavy weights of the Death / Black scene really hope this cooperation with Regain Records do them good. After a somewhat annoying and kind of boring intro for my taste they burst into the album opener ‘Blinded By Light, Enlightened By Darkness’, which is a good taster for the hell to come. Subsequent tracks like ‘I Strike With Wrath’, ‘Age Of Chaos’ (my fave tune!), ‘Eternal Winter’, ‘Serpents (Beneath The Forest Of The Dead)’, ‘Sitra Ahra’ and many others will make you bang your head as if there was no end. NECROPHOBIC show the beginners how Death / Black must be played with class, conviction and musical talent in the most purest form. Whenever you buy this album you won’t get 60+ min of the usual boring and dull stuff we are bombarded with lately and that I can sign it with blood! There is not a single doubt this band momentum is now, they are at their peak and I would like everybody to keep a close eye on their upcoming opuses because they are up for something special. Make sure to check out the video for one of the album tracks at their site: www.necrophobic.net.