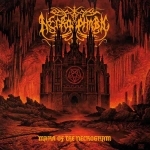 Long-time running NECROPHOBIC are offering again an surpassing album. Every release during their 27 years enduring career had its charms. From the start with creating Death Metal upon the base of Thrash Metal, later on combining it with filigree melodies plus Black Metal atmosphere and ending up in one hour long albums with symphonic elements. When it comes to pin down album number eight I must admit it is simply impossible with a variety NECROPHOBIC offered the listener through all the years. Some people may miss the epic parts of "Hrimthursum" whereas others are still waiting for a exhumed version of "The Nocturnal Silence". The good thing about "Mark Of The Necrogram" is the fact of recognizability. From the first to the very last tune you still know it is NECROPHOBIC playing. I have always thought, if a band like IRON MAIDEN would have taken the left hand path or in other words would have turned into a Black Metal band, they would sound like NECROPHOBIC. But aside with such speculations, the nine songs plus outro are pleasing the listener’s ears with simple, clear songwriting, the symphonic elements are completely gone. Anders Strokirk, on vocal duties for "The Nocturnal Silence" is making his full-length comeback. Actually he returned to NECROPHOBIC in 2014 and his first appearance was the two-track EP "Pesta" last year, which was released in no less but in four different vinyl versions by Century Media. "Mark Of The Necrogram" indeed is published in seven (!) different versions only in Europe, still head-shaking about that fact. But back to the music. You know it is NECROPHOBIC, it is blackened Death Metal the way the band has always been known for and although the overall impression is a bit plain and conventional I liked it from first to last note. For more info and all other related links visit www.necrophobic.net, www.facebook.com/necrophobic.official and www.centurymedia.com