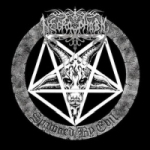 Damn, that awkward moment when you realize that what you get is not a new release of a cool band, which hasn’t released anything new for some years, but a reissue of some older release that you weren’t aware of in the past, but it wasn’t really a big loss anyway… So yes, I expected to hear a new album from this awesome Swedish band, but what this release offers is 2 tracks from their demo “Bloodfreezing” from 1994 (I guess the 3rd track is missing here, because it’s called ‘Hitler – The Most Evil Man In The World’? C’mon… ) and their EP “Spawned By Evil” from 1996. What does it mean? That means that you get more raw sounding versions of 3 tracks from the “Darkside” album and a bunch of SLAYER, BATHORY, AUTOPSY and IRON MAIDEN covers. Am I disappointed because they sound like shit? I wouldn’t say they do, actually the covers sound cool with the NECROPHOBIC touch, but the next time I feel like listening to any of these songs, I’ll stick to the originals, be it the original versions of ‘Die By The Sword’ or ‘Enter The Eternal Fire’ or the better produced “Darkside” tracks, as they sound on the album. I would say that this release is a must only for the most die hard NECROPHOBIC completists, otherwise it’s just cool for a listen to two and then you will most probably forget about it (I disagree here, Sergei… I would definitely consider this a must have… and not only for NECROPHOBIC die hards, but also for Black and Death Metal fans in general, since only the title track ‘Spawned By Evil’ is taken directly from the "Darkside" album… And compared to the original Black Mark 4 song EP version this Hammerheart re-release also features three additional cover songs [‘Nightmare’ by VENOM, ‘Moonchild’ by IRON MAIDEN and ‘Ridden With Disease’ by AUTOPSY] plus the two 1994 demo tracks, turning "Spawned By Evil" into a full length album full of great music now – Frank). www.facebook.com/pages/necrophobic/202035296519104, www.hammerheart.com