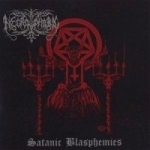 Hammerheart Records is back in business and after having re-issued the first full length albums of Swedish NECROPHOBIC on CD and vinyl last year, here comes the re-issue of the compilation of all NECROPHOBIC recordings, released before their legendary debut album "The Nocturnal Silence". Is the version released by Regain Records in 2009 even sold out by now? (well, at least the cover got changed a bit for this version here – the original logo was replaced by the band’s current logo and the grey artwork was turned into dark red… even the font type of the compilation’s title has been changed into old english for this… it’s up to you, to decide, if all this looks better or worse – Frank) I’m not sure about it, but if you like truly evil sounding old extreme Metal – you surely must grab a copy of "Satanic Blasphemies"! This CD contains the "Slow Asphyxiation" and "Unholy Prophecies" demo tapes and "The Call" 7" tracks. The only track missing here is their very first demo tape "Realm Of Terror", which featured a rehearsal recording of the song with the same title, but its absence makes sense, because this song appears here as a part of the "Slow Asphyxiation" demo on this compilation. "Satanic Blasphemies" is the ultimate proof that this band was serious and professional since day one and gave their priority to quality, rather than quantity (the demos consist of 3 songs each, the 7" consists of an outro and 2 songs). The demo tapes were recorded and produced in a studio and sound damn tight (I would never guess that these are the very first recordings of a back then absolutely new band) and the band already had a sound of their own, and it wasn’t the typical "HM II with all the knobs turned to the max" sound of Swedish Death Metal of that time. Each new release has longer and more complicated songs, which nevetheless never cross the border of getting tiresome and sound dynamic enough to keep the listener’s attention. If I had to mention some reference, I would definitely say that MORBID ANGEL was an obvious primarily influence, but probably DEICIDE deserve to be mentioned as well, not because they and NECROPHOBIC sound much alike, but rather because of the extremely dark and Satanic vibe that "Satanic Blasphemies" reeks of. 5 tracks from "Unholy Prophecies" and "The Call" were later re-recorded and appeared in "The Nocturnal Silence" album, with a better sound, but I would say that the versions that are presented on "Satanic Blasphemies" are at least equally good – I actually prefer the more evil sounding vocals (deeper growling) of the "Satanic Blasphemies" versions of some of the songs. Black Metal and Death Metal were definitely 2 sides of the same coin back in the day, and "Satanic Blasphemies" will appeal to the tastes of fans of both genres. Buy it now! www.facebook.com/pages/necrophobic/202035296519104, www.hammerheart.com