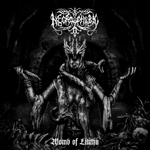 The legendary Swedish NECROPHOBIC are back, four years after their last album "Death To All". Even though they are around for about 20 years now, having released six albums, I lost their trace after the debut "The Nocturnal Silence". I don’t know how this could have happened, since that album was a pretty good bastard of Death and Black Metal, somehow in a line with DEICIDE, only better. So I have only this first album as a reference for NECROPHOBIC’s recent album "Womb Of Lilithu". The first thing that caught my ear after the dark intro was the much more intense blackness on this album. The Death Metal slices have been cut back over the years, which is, in my eyes, a pity. But nevertheless ‘Splendour Nigri Solis’ and ‘Astaroth’ are nice, variable tracks with fine riffing and a darkened atmosphere. The following ‘Furfur’ surprises with classic Metal influences and even a slight Black’n’Roll touch. But after this really nice entrance, the level starts to flatten a lot. Somehow most of the next seven tracks remind me of either toothless WATAIN or uninspired DISSECTION. So, more than half of the album passes me by without any remarkable hook, until my attention got caught again with ‘Opium Black’. Semi-acoustic guitars? Clean singing? Yes, it’s still NECROPHOBIC, adding a new aspect to an album that desperately needed a kick. The keyboard-guided melodies lead us through a nearly epic Black Metal anthem with hymnic choruses and extraordinary, very variable riffing. A piano introduction paves the way to the quite belligerent ‘Infinite Infernalis’, also a great one. The very epic outro ‘Amdusias’ ends up "Womb Of Lilithu" in a way that’s on the edge of being cheesy, but manages to stay on a hymnic course. And so the album left me with one question: is there a need for it? In this case, less could have been much more, to be more precise: with six of the songs from the middle left off, "Womb Of Lilithu" might have been an impressive Black Metal album. But this way, it’s just a lenghty album with only few highlights in the beginning and the end. And is that what one can expect from a band with such a reputation as NECROPHOBIC? Nevertheless Black Metalheads should lend them their ear again and visit: www.necrophobic.net, www.facebook.com/necrophobic.official, or the label: www.season-of-mist.com