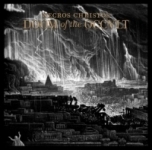 NECROS CHRISTOS is truly a very special band and in my humble opinion it is one of the, if not THE, most important of all contemporary Death Metal bands. NECROS CHRISTOS creates an absolute unique and macabre atmosphere. if you’re listening to "Doom Of The Occult" you can smell and feel all the sinister and unearthly ingredients of an ancient and blasphemous ritual. Although NECROS CHRISTOS is Death Metal in its purest form the music is not just a compilation of some Death Metal songs. It is the audio version of an ancient ceremony. It is the conjuration of an evil archaic entity. Hell yeah, this would be the perfect soundtrack for any Lovecraft reading, "Doom Of The Occult" crushes like a stream of lava through your mind and the dark, ritualistic, hypnotizing songs and the mysterious, mythical, oriental sounding interludes will lead you into a bizarre dimension and before you even realize it you’ll find yourself in front of Cthulthulus throne in R’lyeh. The nine songs are spiced with many intros, instrumentals and acoustic interludes called "Gates" and "Temples". Sure you can just listen to the regular songs, but the eight "Temples" and the five "Gates" are a very important part of the concept of this outstanding album. So I really recommend to enjoy the entire album and not just the songs. But if you just focus on the nine songs you’ll still have an awesome album of doom laden Death Metal. The songs are rather catchy and simple structured (I really mean this in a positive way) but very, very well executed. For example the guitar work is totally over the top the leads and solos are not from this world. Just brilliant!!! Also, voice, drumming, production and the packaging (cover artwork, booklet layout, band photos etc.) everything is so fuckin’ awesome. This masterpiece has a running time of 73 minutes and you won’t find one second of boredom. "Doom Of The Occult" is the band’s Magnum Opus so far. I don’t dare to think what overwhelming masterpieces we can expect from NECROS CHRISTOS in the future. "Doom Of The Occult" is essential for every self respected Death Metal devotee. Don’t miss it!!! www.sepulchralvoice.de, www.van-records.de, www.darknessdamnationdeath.com