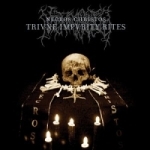 Since the band’s foundation in 2001, NECROS CHRISTOS could establish themselves within the underground as a guarantor for unholy, blasphemous, necromantic Death Metal rites with their much lauded demo and EP releases. Now, the time has finally come, the Berlin-based act celebrates its first full-length ceremony of sacrilege and fortunately “Triune Impurity Rites” proves to be the gloomy masterpiece everybody had hoped for! More atmospheric, more variable, darker, deadlier, NECROS CHRISTOS’ 60 minutes long ritualistic opus invites the listener on a trip through occult soundscapes garnered with sinister church organs, forlorn acoustic guitar interludes, the obligatory introductory invocations (also called “temples”), and magnificent melodic, at times oriental flavoured guitar leads, resulting in a high amount of diversity being added to the overall rather simplistic musical style of the band. The album can roughly be structured into a triptych: the first part ranges from track 1-7, offering the strongest material the band has written so far, especially the aforementioned atmospheric elements shine through brightly here. The second part (track 8-14) is less diversified and delivers classic NECROS CHRISTOS stuff including older hymns like ‘Black Mass Desecration’ and ‘Last Rite Of Christ’. Part 3 (track 15-23) offers a new version of ‘Impure Burials Prevail’ (yessss!!!!) as well as the outstanding three hymns forming the album’s title track. Whereas Part 2 comes across rather conventional after the formidable start, part 3 is again absolutely brilliant and evokes darkness, damnation and death in sheer perfection. Overall, “Triune Impurity Rites” is a masterpiece of hypnotizing, black magickal Death Metal with a strong emphasis on doomier tempos and atmosphere, something most “Death Metal” releases nowadays lack. Fantastic album and destined to be an all-time classic! www.todeskult.de, www.darknessdamnationdeath.com, www.sepulchralvoice.de