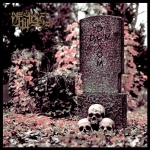 It is already (nearly) four years since the German Death and Doom institution NECROS CHRISTOS announced their third album to be the last of the band. Everything that became known beforehand hinted on a monolithic final album, an exit like a thunderbolt. And so much I can already say: the hints were not wrong! “Domedon Doxomedon” deals in its appearance with the magic of the number “3”. The album is not only the third of NECROS CHRISTOS, it is even released on three CDs (and LPs, of course), titled “ITH א", “SETH ב" and “TEI טטט". Each of the separate albums features three full songs, as usual for the band, accompanied by “Temples” (intros) and “Gates” (instrumental interludes or outros), making each song a unit of three pieces. This way of creating a golden threat that guides the listener in the long run of the album is of course not new for NECROS CHRISTOS, yet it was never that important as it is on “Domedon Doxomedon”. The songs themselves are mainly longer than ever before, more than half of them are close to ten minutes and even longer. As the consequence thereof, the musical range of NECROS CHRISTOS is broadened a little more, without leaving the basic style of the band behind. Yes, Death and Doom Metal are still the driving forces for the band, simple riffs meet the modesty of not having to show technical skills. But the melodic moments of NECROS CHRISTOS have never been more present. The twelve minutes long opener (so to say) ‘I Am Christ’ already is the first perfect example, for this one is extremely melodic, and surprises with a basic feeling that reminds of the most occult stuff MY DYING BRIDE ever wrote. The kind of ritualistic middle part is an unexpected turn in the flow of the song. But the other two songs on the first disc are more in the tradition of the first two albums of NECROS CHRISTOS. Yet both ‘Tombstone Chapel’ and ‘He Doth Mourn In Hell’ would be among the highlights of these recordings. The second disc opens up with another long tune. ‘Seven Altars Burn In Sin’ is another big surprise to me, since it is very much in the vein of MERCYFUL FATE, as far as the occult and traditional riffing is concerned. On top, we get a long and quiet, classic Metal inspired interlude in this song, with excessive solo parts included that show the band’s mastermind Mors Dalos Ra and his guitar playing counterpart The Evil Reverend N. as fantastic classic Metal guitarists. A real musical ride on a roller coaster is ‘Exiled In Transformation’. Starting in a Death Doom style, this one has a simple up-tempo turn as well as some choirs in the chorus part before this one finishes off as it started. And as “Domedon Doxomedon” is a lot about expecting the unexpected, the final song on disc two starts off with a Thrash Metal styled part. Yet ‘The Heart Of King Solomon In Sorcery’ is spiced with typical NECROS CHRISTOS riffs and even a trip into Middle Eastern folklore, which was usually reserved for the interludes. But the real challenge is the third disc, since it features the most twists and turns. But every mastered challenge results in a reward, in this case in the greatest music ever to come from NECROS CHRISTOS. ‘The Guilt They Bore’ is extremely melodic and once more delivers excellent solo parts. On the other hand this one is full of twists and turns, even featuring some blast beats and Thrash Metal parts. With ‘Exodos’ we have another long song, mainly in stately tempi, but with a longer quiet part and breaks de luxe. From this already demanding song, the ‘Gate Of Dimitrijon’ and ‘Temple IX: A Redeemer Will Come To Zion’ lead the way to final master piece and highlight. The 14 minutes long ‘In Meditation On The Death Of Christ’ is the quintessence of the artistry of NECROS CHRISTOS. Based on the bands typical gloomy beat in the beginning, this song varies in many directions during the long run. From harmonic solo parts to a short female vocal interlude in German to a tricky part with a delayed beat to a kind of ritualistic chorus towards the end, this song is a real monolith. The final acoustic outro ‘Gate Of Ea-On’ just leads the listener to believe in a kind of peace. Yes, “Domedon Doxomedon” is a really demanding album, it needs time and it’s hard to listen to it in its entirety, but it is a perfect farewell album for a band like NECROS CHRISTOS. At least I couldn’t imagine a better celebration, a more intense funeral mass. And even though “Domedon Doxomedon” has a very long running time, the splitting into three single albums gives anybody the chance to listen to it stage by stage until the final revelation is revealed. To me, NECROS CHRISTOS has released not only an ultimate album, but a masterpiece. If you need more information, visit www.facebook.com/darknessdamnationdeath. Label contact: www.sepulchralvoice.de