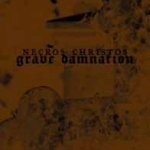 Germany’s darkest unholy forces of death, doom and decay, NECROS CHRISTOS are amongst us again, sowing around the most morbid and satanic old school sounds of ‘necromantic’ Death Metal that is out there nowadays. I don’t care what others may say about them, but for a relatively experienced old school Death Metal consumer that I am, NECROS CHRISTOS brings Finland’s ABHORRENCE to my mind more than just momentarily when spinning around this absolutely, kinda mind-provoking 4-song effort from them (yes, 4 actual songs – 4 intros, that’s the recipe in here). The overall feeling is pretty much the same compared to ABHORRENCE’s ancient-reeking Death Metal stuff; murky, twisted and crushing are just a few well-chosen adjectives that come to my mind when NECROS CHRISTOS starts pumping up venomous black blood into their well-trained, beast’s biceps – getting ready for unleashing a punishment of the ancient gods against everyone who have guts to come on their way. But let’s land back to the firm ground again, I think it’s somewhat fair to say ABHORRENCE is that band that could probably be the closest possible band in comparison to NECROS CHRISTOS. However, where ABHORRENCE relied partly on grinding fast parts within their old school Death Metal manifestation, NECROS CHRISTOS paints their own realm with more eerie colors of doom and darkness – and they do it real well indeed. It’s like they are not here to spare anyone’s lifes, but taking them instead. Nevertheless, it’s relatively easy to state NECROS CHRISTOS are one of the finest and most convincing old school Death Metal acts I have discovered lately, and I’m sure all the recognition they have received thus far, is just the beginning for them for better things ahead of them. Contact: www.darknessdamnationdeath.com. Label: www.worshiphimrecords.com