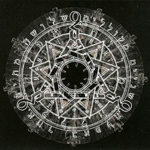 I just love when hard to find demos are released in a compilation format, because either 1. some of us just didn’t have the luck to get a copy of a demo or 2. we did not get turned on to the band until way after the demos have vanished. Luckily for us Sepulchral Voice Records has gone above and beyond by releasing NECROS CHRISTOS’ demo material and tracks from split releases. I mean if you haven’t heard of NECROS CHRISTOS then you need to add their music to your bucket list ASAP. I recall hearing about them through some friends of mine back in 2010 and I was blown away by the German’s 2007 release "Triune Impurity Rites". I am salivating just at the thought of listening to the demo material. Ok so the 2 discs are comprised of the following demos: "Necromantic Doom", "Black Mass Desecration" and "Grave Damnation" (plus some material off split releases) all of which are rare to find and are on many Death Metal collectors "Look Out" list . The music and production are good compared to some of the demos I have heard and the stand out comes in the form of the guitar solos, they just have a life of their own and are not drowned out with static. The vocals and bass sound are spot on, the drums did sound a bit tinny. Otherwise all the material would give INCANTATION or GRAVE MIASMA are nice challenge. As a matter of fact if I am not mistaken GRAVE MIASMA just did a European tour with NECROS in the past few months (lucky bastards in Europe!). Stand out tracks in this box set for me were… the whole thing. Yeah, I am that impressed with all the tracks here. You can’t go wrong with picking up this box set, the material is just that good. Matter of fact you just can’t go wrong with any NECROS release as they really are one of the forerunners for the Death Doom sound and have shown they know the formula for success. I would say run over to Sepulchral Voice Records website (link provided at the bottom) and score this before it is gone. I look forward for the day NECROS CHRISTOS can tour the USA. www.darknessdamnationdeath.com, www.facebook.com/darknessdamnationdeath, www.sepulchralvoice.de