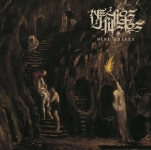 NECROS CHRISTOS finally releases an album that isn’t over 60 minutes. But then the band has called it an EP, even though it’s around 40 minutes long. This band shot to fame and glory with the release of its debut “Triune Impurity Rites” which was a new level in dark Death Metal. Much like NILE, the band tried to infuse Indian sounds into the music but not on an intrinsic level as on an aesthetic level. The band’s brooding music owes a lot to INCANTATION but clearly the attempt is to do it differently. The framework is similar but the pacing and the execution is different. The vocalist has a unique guttural quality and the band places a lot of emphasis on the ideology, spiritual concepts and presentation. With each album, the band experimented more with exotic sounds, so to speak, and it’s on this one that it’s affecting the slightly staid nature of the band’s Death Metal – that’s the best thing to have happened to this band. ‘Black Bone Cruzifix’ is among the band’s finest songs – it’s seven minutes long but is gloomy, has more varied riffing and portrays a lot more emotions than the band’s standard songs. Of course the album is bookended by Indian classical instrumentals and while they present conflicting moods, it works as a medium of intrigue and stands out because no one else is skilled enough to dabble in this except for perhaps RUDRA from Singapore. ‘Va Koram Do Rex Satan’ is a dead ringer for the INCANTATION hymns and is slower than a normal NECROS CHRISTOS composition. But the band is evolving and like RUDRA, has probably more than ever before, merged the experimental sounds albeit in a subtle way into the compositions and makes them rise over the other dark Death Metal bands or INCANTATION clones. Now NECROS CHRISTOS practice the same art but aren’t clones – far from it. Utmost attention is given to each and every aspect of the band’s music and presentation and it shows. I can’t think of any reason now to dislike the band or any of its features – the album length is under check, the music is evolving on a genetic level and taking on influences that no one else is able to, and although the interludes are still breaking the momentum, they provide for a suitable and refreshing contrast to the dark, thick and sludgy Death Metal music reeking of occult fervour. Here’s an album that fans and skeptics alike will enjoy. It’s one NECROS CHRISTOS album that, in all honesty, I can listen to with full attention and interest from start to finish because of the reduced playing time and somewhat straightforward arrangement. It’s almost alternated still with interludes and the critic in me wishes for the band’s Death Metal songs to provide that variation and change in mood but the good news is that the band has been doing that remarkably on this release. It has some of the band’s finest compositions, far more reflective and expressive than ever before. Ultimately that’s what counts because everything else is secondary. Strip the band now of its image and exotic ancient interest and the music still shines. Certainly “Nine Graves” is one of the highlights in this genre and with good reason. For all further information check out: www.darknessdamnationdeath.com, www.facebook.com/darknessdamnationdeath, www.sepulchralvoice.de, www.van-records.de