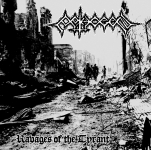 There’s not an abundant amount of Death Metal that comes out of the Philippines. There’s of course DEIPHAGO. But other than that, it’s a little bare. But PATHOGEN’s been churning out good, solid music for the past two decades, and still going strong. Only five full-lengths in all this time, but shitloads of splits and demos… enough to keep satisfying their diehard fans. And honestly, that’s all anyone really asks for. With “Ravages Of The Tyrant”, a seven-track EP clocking in at 28 minutes, that’s more than enough to keep us entertained. The opening “Uuuuaahh!” in ‘Tenebrae Infinitum’ starts it all off. The guitars are old school Death as we’ve come to expect. There’s this hint of early Swedish Metal that fills the mix with glorious abandon. Willie Desamero’s throaty vocals are prominent, melding well with the simple yet effective riffs and demolishing drums. ‘Slaves Of Belial’ (because, aren’t we all?) quickly turns into a pit-inducing massacre for the live audiences. ‘Wretched Gleam Of Disorder’ has a swirling guitar sound and loudly-mixed drums reminding me of ‘THOU SHALT SUFFER throughout. This classic sound fits well with PATHOGEN and is most likely what’s kept them in the eyes of the devoted for so long. ‘Malignant Affliction’ has more of those pounding drums. This is a band with power. Not over-produced, not slick and shiny. Just pure Death Metal as it’s meant to be. And next is a DEAD ENDS cover, ‘No System’, a Punk – infused stompfest that actually fits right in. Final two tracks are demos. ‘Necrolactric Sorcery’ is sort of a doomy, mid-tempo delivery that eventually speeds up and has the ego of a lymbonic god, as ‘Crematorial Destiny’ is a manic, panic-ridden ending to the EP that keeps up the pace of the beginning of the release and wraps it all up in a nice, gore-drenched bow. It’s nice to know there are still bands out there that produce Death Metal as it was originally intended without all the technical shite that newer bands, and the screamo crap bands like to toss off to. PATHOGEN is what we all need in this hellish, miserable world. For more info, check out www.facebook.com/pathogen-ph-177645992334222, www.bestialinvasionrecords.com