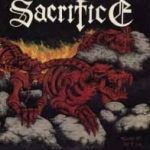 The fact that this re-issue already marks its 20th anniversary now really makes me feel old… But my memories on this incredible debut full-length by Canada’s SACRIFICE are still surprisingly fresh. I actually easily recall how excited I was when I took the vinyl import-version home for the first time back in those days, which in fact wasn’t as easy as you might expect… There weren’t any specialized mailorders, let alone the possibilities of the internet… So, every fuckin’ Friday I met up with a couple of local friends of mine to check out record stores for the lateast Metal releases. And one of them in particular was very special to us, because it was the only one to carry imports as well. Unfortunately only in very small quantities though… That always meant, first come, first serve on that particular day! Anyway, on one of those Fridays it was "Torment In Fire" that caught the interest of one of my friends, but he wanted to give it a listen first, along with a couple of other albums he had found. When I noticed the band’s name (which was still unknown to me at that point), saw the very intense looking live pics on the backcover and read songtitles such as ‘Turn In Your Grave’ , Burned At The Stake’, ‘Sacrifice’, ‘Necronomicon’, ‘Warrior Of Death’ or ‘Decapitation’ I immediately knew that I wanted that record very badly without even listening to it. I simply knew that I was gonna like it! So as soon as the friend of mine had the headphones on I hoped he wouldn’t like it enough, so that I could go for it instead. But he DID like it, yeah even handed the headphones over to me and told me to listen to it as well… And as already expected, what I heard blew me away completely, to say the least! But I tried not to come across too enthusiastic (for obvious reasons)… Luckily (for me) he also found a couple of other records that day that he liked as well, but he couldn’t afford them all… So he had to make a decision and as soon as he told me he would not buy "Torment In Fire", I took over, went to the till and paid it right away – which really saved my day! Needless to mention that I played "Torment In Fire" to death and never regretted the import price I paid for it. Unfortunately its original CD version was more and more difficult to find in the years to come, which (considering the still very strong demand for it) of course resulted in a bootleg (that came out last year or something). But now we finally have the ultimate official re-issue on Brazil’s Marquee Records! In this case the definition of "ultimate" is definitely not exaggerated, cause this version’s got everything you could ask for as a diehard SACRIFICE fan! A very impressive booklet (with tons of old pictures, flyers, covers, lyrics, short liner notes to each song by Rob and Joe and a very detailed biography courtesy of Snakepit editor and Voices contributor Laurent Ramadier), an additional slip-case and of course tons of bonus tracks in surprisingly good sound quality! Apart from the original album you additionally get the classic "The Exorcism" demo on disc one, which features original versions of seven of the album tracks (and gained them the record deal), while disc number two comes up with no less than 22 live tracks, recorded at four different shows between 1984 and 1986. The one song from December 1st, 1984 (‘Turn In Your Grave’) actually is from the very first SACRIFICE show ever and was the only original tune they performed back in those days, while the two shows from 1986 already introduced a couple of new songs that later appeared on their second album "Forward To Termination"! At the beginning of their career SACRIFICE probably weren’t the best musicians yet, nor did they have a clue about a proper production, BUT their energetic, totally aggressive Thrash approach and freshness totally made up for it. If more bands would have stuck to this pissed off attitude and intensity (often heavily inspired by the Hardcore and Punk scene at the time) classic Thrash Metal would probably be still as big as Death Metal became in the years to come. Needless to say that your extreme music collection is incomplete without "Torment In Fire", so make sure to get your hands on a copy of this deluxe edition, which unfortunately is limited to 1.000 handnumbered copies only, so hurry up!!! More info and ordering information at www.marquee.com.br, a killer SACRIFICE website (with tons of detailed info) can be found here www.sacrifice.com.br.