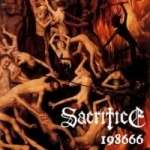 While everyday brings its bunch of unrealised or re-released recordings from bands that most of the time didn’t put their mark onto the scene and simply should be buried and forgotten considering how weak they were, here comes finally one that had to be done after all this time and will hopefully pave the way for more to come from this band! Canada’s SACRIFICE has never received the recognition that they truly deserved probably because they were Canadians first of all and also because their records were simply buried in a sea of Thrash releases. Anyway what you’ll find on this CD is the famous July 1986 "Forward To Termination" demo, a seven song affair that showed clearly back then that this bunch was much more than another Thrash act and in fact that tape paved the way for their second album, a blistering top notch quality effort which was extremely close to be flawless and like it’s noticed in the liner notes of this CD "it was delivered with an intensity that few of their peers could equal", hell yeah! The ear shredding ultra convincing vocals of Rob Urbinati combined with a deadly twin guitar assault and a non stop pounding rhythm section could rival anyday with the likes of SLAYER, DARK ANGEL or early DESTRUCTION and were able to blow them away on several occasions. Just give a listen to the treatment they gave to DISCHARGE’s ‘Possibilities Of Life’s Destruction’ on that demo, a ripping job! On stage it was nothing different as the live recording dating from July 1986 when they were supporting MEGADETH and KING DIAMOND proves it on this CD as well with a mix of songs taken from their first two records (well "Forward…" wasn’t released yet but they were introducing newer stuff on live situations), total death at mach 5!!! If you guys still think I’m wrong and that this band were nothing but very average (please reserve that term for bands like SACRED REICH, VIKING, ASSASSIN, TYRANNICIDE, EPIDEMIC) come on, put the headphones on your fucked up ears, play the likes of ‘Cyanide’, ‘Afterlife’ or ‘Beyond Death’ and find out what real Thrash was all about! A real good effort put together here despite a rather limited budget I suppose. Contact: roburbinati@hotmail.com