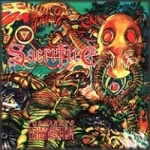 Marquee Records did it again! After their ultimate re-issue of SACRIFICE’s debut full length "Torment In Fire", here’s album numero duo of one of the finest pure Thrash Metal acts ever! Just like the re-release of "Torment In Fire" also "Forward To Termination" is limited to 1.000 copies only, but filled to the max with lots of SACRIFICE goodies. The double CD set comes in an additional slip case (which only features the SACRIFICE logo and title) while the original cover art was used inside on the real booklet. Logo and title got re-worked a little here, so that it looks more professional now. You’re furthermore once again getting liner notes from Laurent Ramadier (historical part) as well as all the original band members (track by track) and all the lyrics and old photos, plus several bonus tracks. The "Forward To Termination" demo (for some strange reason lacking in the band’s cool DISCHARGE cover) plus 26 live tracks, from four different shows in Canada and the US – and all of them in very good quality (considering that it’s just private tape recordings). When I bought the vinyl version of "Forward To Termination" back in those days it not only easily lived up to my personal high expectations, it even showcased a band that (despite its still very young age) musically had matured in a very massive way! While "Torment In Fire" was basically a rather low budget re-recording of their classic demo tunes, "Forward To Termination" finally did offer a proper production and incredibly improved songwriting and musical skills. The songs had gotten longer and more complex, offered several breaks and clever arrangements now, yet maintained the band’s original rawness and energy. While "Torment In Fire" still used to be heavily influenced by a lot of the early Hardcore / Crossover stuff, "Forward To Termination" was definitely more Metal and in that respect it often pretty much sounded like a jam session of members from MERCYFUL FATE / IRON MAIDEN on one hand and SLAYER / EXODUS on the other. Add to all this the rawness of early DISCHARGE and lyrics that were mostly dealing with horror movie topics and you’ll get a pretty clear vision of what SACRIFICE anno 1987 were all about. To me the album’s kick off double (consisting of the short but lethal instrumental ‘Forward To Termination’ and the furious outburst ‘Terror Strikes’) already made up for every single penny that I had spent on the record for being so incredible intense and well written! What a perfect way to begin a Thrash Metal album with and therefore to be mentioned in the same league as alltime classics such as ‘Darkness Descends’ or ‘Hell Awaits’! As most of the material on "Forward To Termination" was already in the band’s live set for quite a while this probably helped them in the studio later on to nail their best versions possible down to tape. So, to cut the crap: just like its predecessor, also "Forward To Termination" is without a doubt an essential Thrash record not to be missed out on! Make sure to order yourself a copy of this incredible re-release, cause you will never ever get a better version of this great record again afterwards! For all further info and ordering details head to www.marquee.com.br. P.S.: "Soldiers Of Misfortune" will be taken care of next… can’t wait!