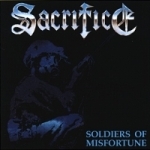 I gotta confess that I found out about the existence of SACRIFICE’s third full length "Soldiers Of Misfortune" extremely late back then… In fact, I bought the original CD version sometime in the mid 90s, simply because the local record store (where I usually picked up a lot of my import albums) didn’t carry the album at all at the time for some strange reason (I suppose we can blame it on poor distribution). But this Canadian four-piece always impressed me a lot, so it was never a matter of time or anything! I liked them in the 80s as much as I still do today! Pure raging Thrash Metal had become very rare at the time, as Death Metal had just exploded, so sticking to it nevertheless was definitely a good sign for a band’s integrity. And SACRIFICE didn’t change a single bit, apart from the fact that they had matured immensely as songwriters and musicians (which was already easily audible from "Torment In Fire" to "Forward To Termination"). Somehow you could compare their evolution to DEATH ANGEL’s, who also delivered raw, energetic first class Thrash on "The Ultra Violence" and later perfected their style on "Act III", without denying their roots. "Soldiers Of Misfortune" has been a highly underrated album in the band’s career, probably because it didn’t have the original "evil approach" to it and (when it comes to the songstructures) incorporated a lot more influences from early RUSH, MERCYFUL FATE and the likes instead. But it all sounded totally like SACRIFICE nevertheless, so even those of you who are pretty narrowminded when it comes to musical preferences ("only Thrash is real!") should easily get a kick out of it as it’s aggressive and fast forward enough to make you bang your heads right away. And tracks like ‘As The World Burns’, ‘In Defiance’ or ‘Pawn Of Prophecy’ could easily have been released on "Forward To Termination" as well. I’m really glad that Brazil’s Marquee Records are putting so much dedication in the re-releases of the band’s back catalogue nowadays, so that "Soldiers Of Misfortune" finally receives the proper treatment it deserves – and more! Just like the re-issues of "Torment In Fire" and "Forward To Termination" it also comes as a fully packed double-CD set, limited to 1.000 handnumbered copies again. Already the slipcase with its silver printed logo / title looks highly impressive, not to mention the amazing booklet with all the lyrics, liner notes to each single song (by the original members), a very in-depth historical piece (again written by Laurent Ramadier) and of course the usual bunch of vintage pictures and flyers. Unfortunately the content of the booklet got mixed up a little, so that you have to find out yourselves where which part or lyric exactly continues… But that’s the only minor criticism, cause on top of all that you furthermore get a 5-song demo from 1989, a studio outtake from 1992 (a new version of ‘Re-Animation’), as well as two Canadian live shows (in a surprisingly good recording quality) from April 26, 1989 and September 12, 1990 (23 live songs in total!!). That’s what I call value for money folks! So if you ever missed out on the record, make sure to get your hands on this version now as it’s without a doubt another must have item for all you old school Thrash lunatics out there! Label website: www.marquee.com.br