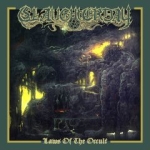 More than during the ’90s, the explosion of the old school Death Metal revival brought us a lot of bands infected by the AUTOPSY sound, a virus of the songwriting that distinguish the style of a band more than other influences in the same genre. SLAUGHTERDAY from Leer, Germany, is surely one of those bands. Thanks to F.D.A. Records, a great label that supports them since their first demo tape "Cosmic Horror", released in 2013, today we’re talking about their second full-length album, "Laws Of The Occult". If you liked the first one, "Nightmare Vortex" and the EP "Ravenous", you can only expect another dose of old school Death Metal in the same vein as their previous works. But, if the originality remained unchanged, quality has improved as much as needed to approve this new effort of the German tandem formed by Jens Finger on guitars and bass, and Bernd Reiners on vocals and drums. They have a complete line-up with five musicians on stage, but the studio line-up is the same since they started in 2010. So I can imagine how well they work with good synergy to get the same goal. Jens Finger is the creator of many good lead guitar parts and sharp solos that spice all the songs with macabre melodies. While the Finger’s touch reminds of the Cutler / Coralles monumental style, the Bernd Reiners’ vocals remind of Chris Reifert, even if I can also compare him to Jan-Chris De Koeijer from GOREFEST sometimes. It’s not easy to chose the highlights of the album, but I’d say that ‘Sepulcral Ways’ and ‘Torn By The Beast’ mainly have catched my attention. To close "Laws Of The Occult", SLAUGHTERDAY covered ‘Plunging To Megadeth’, the classic opening track of "Tales Of Terror" by HALLOWS EVE, an exciting selection in my opinion. A last comment is for the production: the mixing is very well balanced, I can hear all the instruments in detail and the sound of the drums is really astonishing. I’d say that it doesn’t make a fool of all the recent AUTOPSY albums produced by Adam Munoz. Keep updated with these guys at www.facebook.com/slaughterdayofficial and pre-order a copy of the album on CD or LP at www.fda-records.com