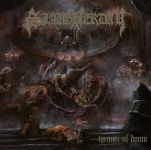 The Eastfrisian Death Metal masters SLAUGHTERDAY are back. It’s not even two years ago that the evil bearded duo (read my envy between the lines) released their great “Ancient Death Triumph”, a title that said all about the album. Now Bernd and Jens tell us about the “Tyrants Of Doom”. And this album is the crowning of their career so far. Yes, the foundation of their sound still is Death Metal the ancient way, according to the American Reifert law (to refer to their famous “Slaughterbeer” shirt). But knowing that these guys are total enthusiasts of all kinds of Metal, it was just a question of time until they weave some 1980s Metal influences into their sound. And this happened now. Even better, it sounds fantastic, as the combination of Death Metal and guitar leads in Classic Metal style sounds fluent and very natural here. It’s just like two things growing together that belong together. Though the album seems to start in best SLAUGHTERDAY manner with ‘Mauled’, that bows to the spirit of old fashioned Death Metal in common and AUTOPSY in particular, this opening already surprises with a nice melodic lead break. Love the groove in the chorus, by the way. The following ‘Coffined Saviour’ and ‘Necromantic Visions’ feature dominating lead guitars that absolutely fit any classic Metal tune. Even though ‘Grave Nihilist’ is an overall damn catchy Death Metal song (finest song writing here), the spooky break knows to leave a mark. Another very varied and outstanding track is the filthy ‘Pestilent Tombs’ with rotten Doom Death grooves meeting the D-beat that flows into a nod to old fashioned Metal. The title track has a fine WARHAMMER styled chorus, while ‘Drown In Filth’ is a real blaster with melodic leads and a nasty hook in the break. ‘Parasitic’ is the last original song on “Tyrants Of Doom”, one more variable interpretation of classic Death Metal with nearly hard rocking leads. But this is not the end of the album, as it is a kind of tradition that SLAUGHTERDAY close their albums with a well chosen cover tune of classic 1980s Metal bands. This time, the choice was ‘Predator’, originally to be found on the classic first album from CARNIVORE. I always asked myself why nearly no one ever dared to do a cover of this influential, yet always debated band (well, Greek RAPTURE already covered ‘Sex And Violence’ on their 2016 EP “Total Madness Reigns” – Frank). So I guess it needed a band like SLAUGHTERDAY to do it, as they did great justice to the song and recorded another excellent cover version. To sum it up: it’s hard for me to deny that “Tyrants Of Doom” is a very hopeful aspirant for the award “Album of the year 2022”. If you’re still not convinced, go to www.facebook.com/slaughterdayofficial or www.facebook.com/fdarec