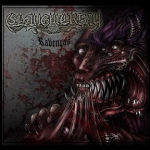 It’s just half a year ago that German SLAUGHTERDAY unleashed their first full length upon mankind. “Nightmare Vortex” reached highest acclaim, not only in the pages you’re reading right now. Despite this brilliant reception, I somehow missed out this album. Why? I’m not quite sure… Blame it on the unusual amount of new and more or less exciting new extreme Metal bands throughout the past months and years. And maybe on age as well… So I had to do some musical investigations when Frank offered me to review the newest release of SLAUGHTERDAY, an EP called “Ravenous” with four exclusive tracks. And what I heard of “Nightmare Vortex” made me pretty sure that I missed an album of the finest Metal of Death. But I’m not here to talk about that album, “Ravenous” is the newest and hottest stuff to inform you about. And the four songs on this EP aren’t all new, in fact it features re-recorded versions of the two demo songs from “Cosmic Horror” that were omitted on “Nightmare Vortex” and a cover tune. So it’s just the opening title track that’s really new. But ‘Ravenous’ alone is worth getting the EP. It’s an extremely variable crusher that mainly dwells in the doomier realms of Death. The guitars in the middle part are fantastic, laying a very harmonic overtone on a scaring groove of Doom. This song features anything that’s possible within the borders of Death Metal. The only thing I slightly dislike is the fact that it was faded out in the end. But that’s only bean counting. Those two newly recorded demo tunes are either great, with ‘Crawling In Secrecy’ in a fantastic AUTOPSY styled groove and great Swedish inspired guitar harmonies in the end part. And ‘Abyss Of Nameless Fear’ is the song here most grounded in the faster tradition of Death Metal, yet it’s either versatile than anything I heard from SLAUGHTERDAY. In my ears, this is the greatest strength of the band: the extreme variety in the songwriting, like they absorbed any Death Metal album ever recorded and made up their own, unique and extremely high-classed style. Finally we have the aforementioned cover tune. ‘Ave Satanas’ is a fantastic version of the ACHERON killer from their classic “Rites Of The Black Mass” album. And I just love what SLAUGHTERDAY made of this song, since it beats the original by far with the tons of heaviness added to the atmosphere of the original. To sum it up: these four songs are nothing less than frighteningly great and a promise that SLAUGHTERDAY will be among the greatest bands of the genre, as soon as they release another album of this quality. Should I mention that the sound of “Ravenous” is a monster? Yes, I have to. So, just visit: www.facebook.com/slaughterdayofficial, and the label, of course: www.fda-records.com