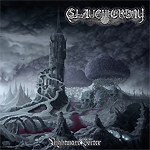 German Death Metal band SLAUGHTERDAY formed in 2010 and now unleashd their debut album, which by the name you can guess, deals with death, slaughter, horror and at times histories of the cult of the ancient ones. Musically speaking, and as the name implies, there is a heavy dose of AUTOPSY and more than once references to a band once fronted by a Warrior in the name of CELTIC FROST, and for some reason it also reminds me of DEMIGOD, and at times some early DISMEMBER. The vocals are actually the thing that sound a lot like ‘Mental Funeral’ Chris Reifert. The overall production is also very heavy, with a crushing guitar sound and there are enough tempo variations in the songs, keeping their Death Metal pure from any useless influences that death and decay commands to do. The use of morbid melodies is done with class adding that sinister aura to the music. A creepy and fantastic cover art makes this package the blood dripping wet dream of any real Death Metal follower. The vinyl version possesses an additional extra song in the form of a cover by PENTAGRAM, the US Doom Metal veteran band. So, any undead legion fans out there, add this to your list of things to get before the nightmare becomes real. Most songs are in the same quality, so we got here a very complete album with musical quality in all of the songs. Another deathstrike for F.D.A. Records, releasing quality bands for the Death Metal armies. More info at: www.facebook.com/slaughterdayofficial, http://slaughterday666.bandcamp.com, www.fda-records.com