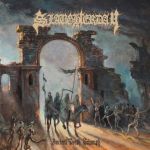 SLAUGHTERDAY are finally back with album number three and the opener ‘Decarnation’ sounds pretty unsual as it could easily have fitted as an intro on a Gothenburg origined album of the mid 90s. But immediately when ‘Ancient Death Triumph’ starts it is clear what really happened. Jens and Bernd travelled back in time and after DEATH came back from their “Leprosy” tour and and Rock Rozz left, Jens and Bernd started jamming with Chuck as he always hooked up with musicians who challenged him. Ok I stop kidding, but SLAUGHTERDAY really managed to capture the old school Death Metal vibe and magic here and I hear a lot of “Leprosy” in the sound what is not meant negative at all. I really like their approach and songwriting and they manage to transport this certain magic of early DEATH and POSSESSED into our current time and this without stealing ideas or simply copying the old masters. ‘Expulsed From Decay’ is a groovy mid-tempo Death / Doom Metal monster and shows an AUTOPSY edge before again a bit of POSSESSED returns into their guitar work. Especially the drum work and the grunts are excellent once again on this album. ‘Impenitent Agony’ continues to groove with slow Death Metal interruptions and again guitar tunes in the vein of Chuck and Rick Rozz appear but far more matured. ‘Spawn Of The Incubus’ and ‘Apocalyptic Dreams’ are bastards somewhere between CROWBAR and DEATH with pretty interesting leads and especially the bass-lines in ‘Apocalyptic Dreams’ really nail it. ‘Disincarnate Forces’ for me is really the highlight of the album as it has all trademarks SLAUGHTERDAY is standing for and shows the immense potential the band still has and the growing abilities in songwriting of the two Frisian warriors. And of course the fantastic production of Soundlodge Recording once again really fits perfectly to these fantastic tracks. And with ‘Thumb Hang’ they have chosen a fantastic song to cover and their version is very good even though I would have been curious to hear this one with clear vocals as trial which I normally hate but the grunts also fit quite well and the keyboards and bass-lines are brilliant. What a well-chosen track to be covered. For more info and support check one of the following sources: www.facebook.com/slaughterdayofficial, www.fda-records.com