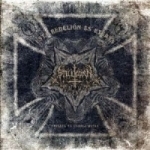 An excellent blend of INCANTATION, VADER and a dozen other brutal bands is what awaits you on the latest STILLBORN record. As I’ve said many times, there is no dishonor in copying so long as it is done with as much zest and zeal as possible. How many times have we heard the blast beat? How many times have we shuddered in disgust at the hundreds of bands who never cease to remind us why Death Metal died in the first place? But, how many times have we heard bands who remind us why Death Metal ever had a presence in the underground? STILLBORN is one of those bands. It also helps that they cover tracks by SARCOFAGO, HELLHAMMER, RUNNING WILD and PILEDRIVER. Songs by these four masters of the craft won’t ever sound tired, or poorly rehearsed. As for STILLBORN’s original compositions, they are written in, more or less, the same vein as the bands they cover. A formula that produces not originality, but affirmation. www.myspace.com/naturalborndestroyers, www.stillborn.pl