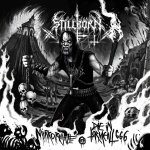 This is one of those releases which makes from the first minute clear where the journey would lead. Death Metal, nothing more, nothing less. Plain and simple, pitiless and uncompromising. So if you are out for something extravagant or special better search elsewhere. Just take a look at the cover, I guess no one is expecting some kind female fronted Ambient Suicidal Emocore. Taking a closer listen there are huge influences of Black Metal, of both, the first and second wave. Also some Thrash Metal and even Grindcore riffing can be heard, making this output a little bit versatile, but not too much. What stroke me the most is the fact that "Mirrormaze & Die In Torment 666" is not a current issue but a re-release of the first two demos, released back in 1999 respectively 2001. If my information is correct, no re-recording or re-mastering took place, this is the original sound and despite being about nearly 20 years old it is absolute adequate for the year 2018 (the CD is limited to 300 copies and comes with two additional, previously unreleased, tracks from those demo sessions – Frank). The band from Poland recorded the demos at Manek Studio and Hertz Studio and the result shows how worth the effort was. In conclusion this compilation is not just for fans of the band to complete their collection, but for everyone who wants to listen to merciless Death Metal with no frills. For more info visit www.facebook.com/stillborn.pol, www.godzovwar.com