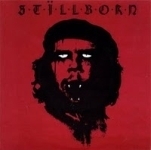 New and upcoming label I Hate Records from Norrköping, Sweden dug out something really obscure with this excellently designed 7" containing two rare tracks of the mid-80s underground Doom band STILLBORN. Since I expect only few people to know anything about this fascinating act I’d like to give you a short overview of their career, which is summed up in the inlay of this bloody red piece of Vinyl as well. STILLBORN were founded in Sweden in 1984, gained cult status after numerous gigs in their home country and Denmark and the release of the morbid debut album "Necrospirituals" in 1989. Before that the band had recorded the demo "Tounge The Thong" (limited to 100 copies), which contained one of the two tracks featured on this EP, namely ‘Yesterday’s Blood’. The second song ‘Son Of Sodom’ is an exclusive track and as great as the EP’s A-side, if not even better. Both songs were remastered and offer a morbid blend of early Heavy Metal à la BLACK SABBATH and Goth Rock / Wave like SISTERS OF MERCY, who are a very obvious influence in the vocal department. It might require the listener to invest some time to get into it, but once you are in STILLBORN’s sinister aura will consume you… Burning candles, darkness, macabre eroticism, the stench of perversion, despair and hopelessness are captured in these two songs and I am sure that bands like PARADISE LOST or ENTOMBED, who paid tribute to STILLBORN, were attracted indeed by those fantasies and imaginations the Swedes perpetuated musically and lyrically. Whoever likes old Doom, really obscure sounds or simply does not fear to open his ears for some atmospheric, quieter sounds should obtain a copy of this limited EP (500 handnumbered copies) soon!!! Of course it is not the typical Voices-stuff, but something really special and really good. Visit http://ihaterecords.cjb.net to get "Yesterday’s Blood" and be sure to visit STILLBORN’s website http://biphome.spray.se/inghen/stillborn/ to find out what happened to the band in the 90s and check out some sound files.