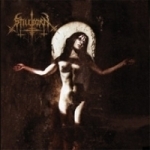 Already mentioned with their debut album "Satanas El Grande Era" in Voices From The Darkside Polish STILLBORN are about to release their 2nd CD called "Manifiesto De Blasfemia Era" again through Pagan Records. Although I have the highest opinion about the Polish Death Metal scene with such great and outstanding bands as mighty BEHEMOTH, restless VADER or the sadly currently in everyone’s mind DECAPITATED (rest in peace Vitek!!), I have to admit that STILLBORN, though a pretty good and musically as well as technically quite amazing band, still simply can’t compete with the aforementioned bands up to this moment. The 11 tracks on this CD offer high speed Death Metal, again played from highly skilled musicians, and presented with 3 different vocalists who make the whole Death Metal soup more varied and interesting. If you are a fan of Polish Death Metal, technically outstanding, fast and brutal in the vein of bands as BEHEMOTH (minus their Egyptian influences) I can recommend this release to you. I’m sure we will hear more from STILLBORN in the near future and if they will invest more into an own identity I can imagine that they will be listed as one of the top names of Polish Death Metal in the near future. Still they have to finish that goal… www.paganrecords.com.pl.