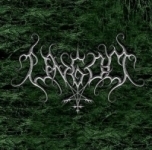 Eleven years after their last release (the by now legendary split 7"EP with California’s Death Metal masters SADISTIC INTENT) Germany’s UNGOD have finally returned to the scene with some brandnew music. Unlike many other reunions these guys luckily managed to stay completely true to their roots and as a result still deliver their grim Metal in the rawest and ugliest form you can imagine. This ain’t your typical hightech digital recording with a massive wall of sound, but always pretty simple structured and straight ahead performed, crushing blackened Thrash Metal. Old school as fuck and with an almost analog sounding, perfectly fitting production… So, every CRADLE OF DIMMU FUNERAL worshipper should still avoid the band at all costs. This promo MCD was released in a strictly limited number of 50 hand-numbered copies and features 4 songs as well as an intro and outro. Two of the songs (‘(Dark Tomb) Of Ungod’ and ‘Dawn Of The Black Apocalypse’) will end up as bonus tracks on the digipak CD re-release of UNGOD’s debut full length album "Circle Of The Seven Infernal Pacts", while the complete promo material is supposed to see the light of day as a vinyl only 12" EP (both to be released via Kneel Before The Master’s Throne soon). Even though it may sound pretty exciting to many of you that the track ‘Dawn Of The Black Apocalypse’ features guest vocals by Martin Missy (PROTECTOR), Hurricane (ZARATHUSTRA) and Patrick "Traumatic" Kremer (ex-WITCHBURNER), to me this song as a whole turned out to be the weakest out of the four on offer here. All the different vocal styles are simply too much and in all honesty don’t really work too well together. It’s luckily getting a lot better towards the end of the song when the core of the band is back on track again. So, all in all this is definitely a very promising comeback, especially because of the fact that the band didn’t give a fuck about any modern trends and still managed to keep their uncompromising attitude alive after all those years! www.myspace.com/ungodstomb, www.mastersthrone.de