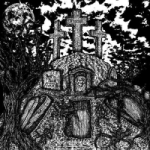 Returning to the scene in 2009 with a promotional demo, UNGOD have, at last, released their first album in 18 years. The last album, “Circle Of The Seven Infernal Pacts”, was released in 1993. It was a different time – a different era, as many would say. UNGOD are not only aware of just how much time has elapsed since the old days, they’re evidently angry about it, and have taken it upon themselves to remind the world what real Black Metal should sound like. “Cloaked In Eternal Darkness” picks up where the previous album left off, and does refreshingly little to elaborate. UNGOD is nothing if not observant of old traditions. No keyboards, triggers, or artifices of any kind commercialize this album. The songs, particularly ‘Shadows Of Golgotha’ and ‘Deserted Human Plague’, contain mesmerizingly dark riffs, beautiful yet deadly to the ear. ‘Morbid Predictions’, the 8th track, is perhaps the most “old school” song on the entire album. A blazing start, frantic soloing, sepulchral vocals, and passionate riffing make this song one of UNGOD’s best. And “Cloaked In Eternal Darkness” as a whole should be remembered as one of UNGOD’s best recordings as well as one of the best albums of 2011. It’s great to have these guys back. Hail UNGOD! www.ungodstomb.de, www.myspace.com/ungodstomb, www.mastersthrone.de