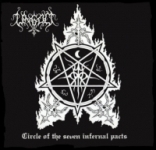 “Circle Of The Seven Infernal Pacts” is fucking early ’90s Black Metal mastery from a seminal Deutsche horde of pure ancient grimness. Classick, ice-cold blooded, with majestically measured doom-felt pieces, Gochsheim in Bavaria’s UNGOD excel at whisking you up and over the rooftops, like Margarita in the Devil’s caress. Of this ilk, Czech’s MANIAC BUTCHER conjures complimentary reminiscences of impossible grandeurs never known… ah, but to go on. UNGOD’s debut full-length has depth, varied tempos and much interest for the discerning listener of the black arts. The production is dark, like stepping into the dim light of a cave or mausoleum; though not to imply a raw, necro, fuzzy, or tape hiss sound to this; instead it’s obscure but balanced and does very well to represent the band’s character, actually. The original wax, limited to 500, dropped in 1993 on Heretic Supremacist Brotherhood Records. The CD edition that followed was Merciless Records’ first ever release. Come today and behold the triumphal CD re-release by Kneel Before The Master’s Throne Records and featuring bonus rehearsal tracks from the early ’90s (9 songs in total – two instrumental rehearsals from July 28, 1992 and March 10, 1993 respectively as well as a March 10, 1992 rehearsal with vocals – Frank) . Still, the story of UNGOD is of an unending. The cult lives on even today, reeking in their human skin and seeking for worship. Twisting and writhing in a smoky crypt of Hell, the UNGOD has tasked its enslaved mortal adherents without rest for close to two decades now, expulsing a number of splits, EPs and demos along the way. By-products of Hell, these are. You would be well advised to support this craven and possibly immortal force of unholy flesh. www.myspace.com/ungodstomb, www.mastersthrone.de