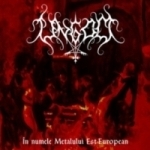 With a name like UNGOD, it’s hard to resist the temptation to use the word "godly" as an adjective in describing their latest demo "În Numele Metalului Est-European" – a tribute from the band to the Eastern European Metal scene. UNGOD has done what few bands have before, and that is to make a tribute album that sounds like a real tribute, and not some absurd collection of tracks which, for any other band, ironically makes them look like garage-bound amateurs. What you get here is 7 own songs with Romanian vocals, performed by guest vocalist Zdrobitor Setešos, who’s a friend of the band. The original versions of these songs (with UNGOD’s regular vocalist Infernal Molester) will end up on various split releases in the near future. Polish and Czech bands such as TURBO, KAT, ROOT, MASTER’S HAMMER or TORR are all given their due, with well played, and – above all – honest conviction from a woefully overlooked band. This release surely wouldn’t be possible if UNGOD didn’t love Metal from the inside out. The tape version of the tribute sold out in April (it was limited to 100 copies) – but the band is preparing a vinyl version soon, so keep a look out. Support UNGOD! www.myspace.com/ungodstomb, www.myspace.com/oldspiritproductions