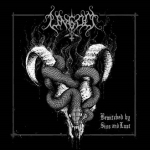 How many bands that have made a comeback that do NOT put their legacy to shame can you name? I surely wouldn’t be able to come up with a single Thrash band that fits this criteria, and in general – there aren’t many of them in any genre. UNGOD is one of those few exceptions – they reunited nearly a decade ago and remained as consistent as they used to be in terms of their musical direction, despite the numerous line-up changes. As a result, this new album sounds just like one would expect it to – primitive, angry and very organic Black Metal. They keep following their simple formula of minimalist yet rather catchy riffs, a good balance in tempo variation and rather filthy atmosphere – and it works well. Unlike many bands that play a similar, 90s style Black Metal – UNGOD neither try to fuck up the sound on purpose, nor do they use a clicky bass drum sound. Each instrument sounds rather natural and overall – the songs have a rather "live" vibe. Whether they play one of their fastest riffs yet, or a slow one – it all flows well and it doesn’t take more than 2-3 listens until many riffs start to feel rather familiar. Bottom line – fans of well crafted 90s Black Metal that actually has memorable riffs and a dark vibe – will not disappointed by UNGOD’s new opus. Fans of old MAYEM, DARKTHRONE, TANGORODRIM don’t miss out on "Bewitched By Sins And Lust"! It surely will not be as hyped as many other albums out there, but it’s worth your attention more than the majority of them! www.facebook.com/ungod-1037290856315377, www.finalgaterecords.com