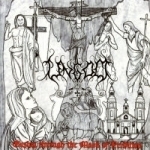 UNGOD / MORT
Gazing Through The Mask Of Perdition / Ascent Of Chaos
(None Shall Defy Records)
12:31min

I’ll be the first to admit that I’m not the biggest Black Metal fan in the world (personally I’m more of a Death Metaler), so I found it hard going to get round to reviewing this UNGOD / MORT split (as Frank will tell you! ; -)). However, I was hoping that by reviewing this split release, my attitude to Black Metal would change somewhat. After listening to UNGOD’s contribution to the split, the newly recorded track ‘Gazing Through The Mask Of Perdition’, the complete opposite happened… I hated what I heard! The production sounded atrocious, especially the snare drum which sounded like a tin foil sheet being smacked against a wall; the riffs were almost pathetically lacklustre and completely unoriginal and the drumming as basic as it could get… I couldn’t wait for the 6 minute track to end! However, on second listen the track sounded much better… perhaps my ears were biased due to my unfavourable attitude to Black Metal. Whatever it was I found the track worked quite well, especially where it starts to pick up steam at the two minute mark. However at 6:01 the track becomes repetitive (there’s only 3 or 4 riffs in the entire song, none of which are worthy of repetition and the drum beats aren’t exactly groundbreaking either). This track would have been much better if at least 2 minutes were cut off. Not exactly a release that would entice me to check out UNGOD’s previous material I must admit. MORT’s offering, ‘Ascent Of Chaos’, on the other hand, blew me away! Straight after the slow, foreboding intro, the track immediately kicks the listener in the teeth and the assault continues almost completely uninterrupted throughout its 6:30 minutes. The song is excellently structured, taking the reader on a violent ride almost from start to finish. Its pacing is excellent and the riffs flow perfectly into one another; the riffs just before the minute mark and at 1:35 being an excellent example of this. The riffs throughout are the highlight of the track for me, sounding like a mix of EMPEROR and MORBID ANGEL at their best. The vocals also deserve a special mention as they sound as ferocious as a ravenous Rottweiler while still remaining clear enough for the listener to hear what blasphemy is being spewed from Kvaltar’s mouth. The drumming is also excellent throughout, with each beat complementing the riffs perfectly. The production is also a step above that of the UNGOD song. ‘Ascent of Chaos’ is definitely a track that would make me want to keep an eye on the Franconian Black Metallers MORT. The 7" vinyl split EP is limited to 500 handnumbered copies on heavy vinyl. The artwork is done by black-death-sign and a 4 page inlay and a poster that contains ‘additional visual blasphemy’ is included with the release. For more on UNGOD check out www.myspace.com/ungodstomb and for more on MORT check out www.myspace.com/truemort. More about None Shall Defy Records at www.myspace.com/noneshalldefyrecords