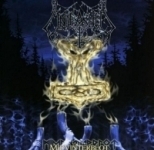 Sweden’s favourite Viking sons return with their 8th (yes, 8th!) studio album and what a fine offering it is. "Midvinterblot" is an extremely solid affair featuring 15 well-crafted, acutely structured, perfectly executed Death Metal ‘anthems’ rounded off by an exceptionally slick and crystal-clear production courtesy of guitarist, Fredrik Folkare. A good song is a good song regardless of genre and a simple, well-written song is harder to write than most people give credit and it is here that Unleashed are at their greatest and also deadliest. Unleashed, and particularly here on "Midvinterblot", are one of few Death Metal bands who demonstrate ‘pop sensibilities’ and by that I mean crafting catchy, well-written, well-structured 3-4 minute chorus-dominated songs; a formula usually more commonly found in Rock / Pop than Death Metal. Their brand of Death Metal has always emphasized "song" over technicality or complexity and nowhere is this more apparent than on "Midvinterblot". This album boasts what Unleashed do best: simple, heavy, dark, melodic and catchy Death Metal. A key Unleashed trademark featured is Johnny Hedlund’s aggressive and coarse yet clearly audible vocals, which allows listeners to quickly become familiar with the lyrics (once again, brilliantly focused on the Vikings and their epic bloody battles) and melodies. With the opening track ‘Blood Of Lies’ hammering down hard with a furious blast-beat chorus, "Midvinterblot" finds Unleashed in terrifyingly mighty form! True to style, it’s fast and aggressive but backed amply with groove, melody and structure – all within just 2:39. ‘Age Of The Warrior’ is another solid, mid-paced offering with an emphasis on groove and a riff reminiscent of Slayer’s ‘Postmortem’. The title track, ‘Midvinterblot’, is definitely one of the album’s highlights and also clocks in at just-under three minutes! It’s supremely solid and guaranteed to nest in your brain after just one listen with an anthem-like chorus and chunky riff driven groove. Other highlights are ‘Triumph Or Genocide’ and ‘Salvation For Mankind’, which are both as crushing as hammer to skull. It’s fair to say that "Midvinterblot" is similar to 2004’s "Sworn Allegiance" album but only here the band are more refined and sharper. Just listen to the guitar melodies, vocal patterns (and their deliverance) and the guitar soloing (particularly in ‘Age Of The Warrior’) and you’ll see that Unleashed are currently at the top of their game. Comments like "I like your old stuff better than your new stuff" don’t apply to Unleashed and in fact they only seem to be getting better with age, perfecting their already successful formula. In this regard, Unleashed remind me of Bolt Thrower in several ways: both bands are battle-hardy, both have stuck to their guns and both continue to play their distinctive brands of Death Metal, which has remained unchanged in over 15 years, and finally both are releasing arguably the best records of their careers. If you own any of the previous albums by Unleashed, you may know what to expect and therefore may think you will not find anything new here – however what you will find though is Death Metal of the highest calibre. Hail Thor and hail Unleashed! www.unleashed.se.