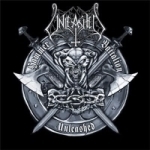 Evaluating recent releases by classic bands is always somewhat difficult. All too often, people like to show Christian forgiveness to their favorite bands even when their music falls short. There is no obligation to approve of a band’s recent output based on the classic status of their earlier work. However, if a band has already created something widely perceived as a classic, their new work at least deserves a thorough listen before judging it too severely. Certainly, UNLEASHED has attained this classic status, and, thus, I have been listening to their new album, “Hammer Battalion”, repeatedly over the past few days. To be honest, I am not extremely familiar with any of UNLEASHED’s albums past “Across The Open Sea.” Though what I have heard has always sounded respectable albeit somewhat uninspired at times. Through the years, UNLEASHED have sought to maintain many of the same elements within their music that established them as legends of the Swedish Death Metal scene. Their thematic emphasis on Viking and anti-Christian imagery and exceptional versatility in combining their uniquely evocative melodic passages with the more crushing and driving riffs so characteristic of the well-known Swedish Death Metal sound are established hallmarks of any UNLEASHED album. Indeed, these structures are omnipresent on this album. And over the course of some 18 years and nine albums, UNLEASHED have maintained a relatively consistent catalog of releases. Therefore, if one is looking to hear a solid work of Swedish Death Metal, there is no shame in giving this album a few listens. Unfortunately, however, I simply cannot comprehend why, after the initial novelty of this new album wears off, I would reach for “Hammer Battalion” rather than “Where No Life Dwells.” Listening to early UNLEASHED alongside “Hammer Battalion” also makes one truly lament the advent of crisp and highly processed modern production. Much of the brutal intensity and aggression characteristic of the best Death Metal recordings is lost by utilizing the clarity of modern production and recording techniques. Also, the vocals and lyrics on “Hammer Battalion” leave much to be desired. Lyrically, UNLEASHED cover much of the same territory as on previous releases, but sometimes lack the nuances and subtleties that produce exceptional lyrical content. Rather than the darker, more impressionistic lyrical style utilized in the earlier years, the lyrics on “Hammer Battalion” are far more simplistic and uncreative, and frequently relying on cliché phrases and one-liners (‘Long Before Winter’s Call’ might contain the most egregious lyrical offenses on the album). This wouldn’t bother me so much except that the vocals are such that the lyrics are completely audible. The vocals themselves lack aggression and are all too often written to the rhythm of the guitar riffs oftentimes weakening the overall effect. This album is not devoid of epic passages, however. At its peaks, “Hammer Battalion” finds UNLEASHED achieving complex and poignant melodies that are as successful as anything they have done in their career. Unfortunately, although nearly every song contains some exceptional moments (see ‘Black Horizon” and ‘Hammer Battalion’), this is rarely sustained for the duration of an entire song before they begin playing the less unique parts that are scattered abundantly throughout the album. Ultimately, with the recent surge of so many new bands worshipping the earliest tradition of Swedish Death Metal, UNLEASHED’s more modern and less underground perspective on this sound, while far superior to the vast majority of bands out there, nonetheless seems to be lacking some of the elements necessary to create an exceptional Death Metal album. www.unleashed.se