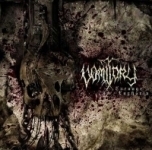 Consistency speaks volumes more than originality sometimes. We often forget that Metal is supposed to kick our asses, not necessarily change the way we think about the music as a whole. To that end, bands like DISMEMBER and VOMITORY have committed themselves, the latter probably more so than DISMEMBER. Though both from Sweden, VOMITORY has, much like HYPOCRISY in their early days, embraced the American Death Metal ethos and wedded it with Swedish sounds. The result has been throughout the years, very rewarding both for the band and their fans. “Carnage Euphoria”, the most recent installment is a little more bass heavy than previous outputs, and the guitars sound much more as though they were lathered in gooey syrup, but it all works to the album’s advantage. A limited digipak edition of the album is also available with an approximately 90 minutes bonus DVD enitled “Dead & Drunk For 20 Years”. It contains “live clips from different shows during the ’90s with different line-ups and drunk moments on the road and in the studio.” This is a great record, with plenty of heart. www.vomitory.net, www.metalblade.de